Music of the Middle East

Caravan World Music Ensemble was established in 2019 by Grossmont College as a way to represent the diversity in our community. It is the only ensemble of its kind in San Diego County. The ensemble, open to all levels and instruments, focuses on the music stretching from the Moorish kingdoms of Andalusia in Spain, down through Morocco, and across the rim of Africa to the rich music traditions of Afghanistan and Iran. The 1-unit class (MUS-142 Middle East Ensemble) offers students and community members an opportunity to become involved in a living tradition of music that includes possibilities outside of Western music, including the so-called “quarter-tone” interval characteristic of some Middle Eastern musics. Additionally, students will learn about rhythmic systems of the Middle East and improvisation, as well as areas of interest to the players themselves. Contact director, Farhad.Bahrami@gcccd.edu  to learn more about Caravan. 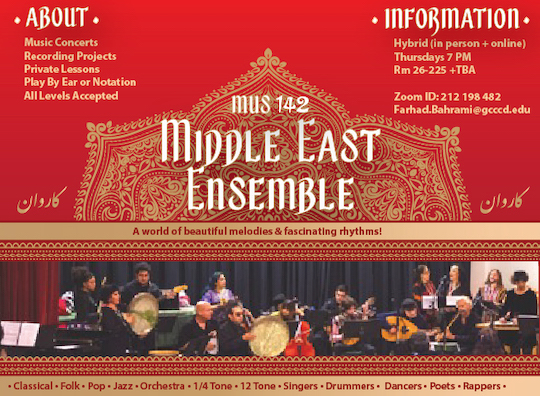