The 42nd anniversary of the PSA Flight 182 crash in San Diego that killed 144 people will be remembered Sept. 25 with an online commemoration 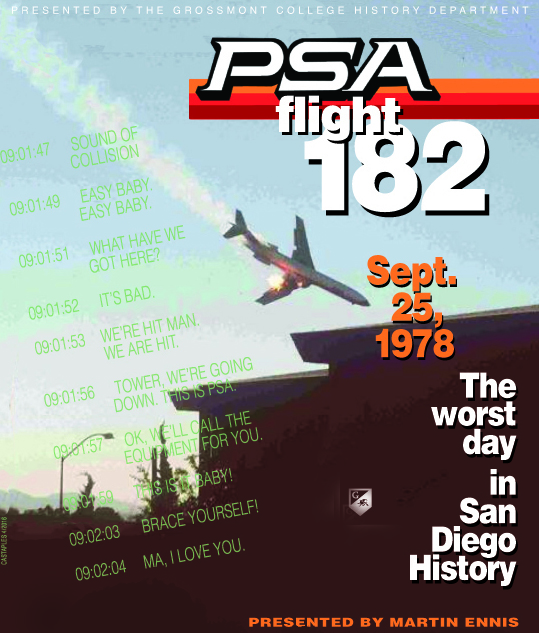 The 42nd anniversary of the PSA Flight 182 crash in San Diego that killed 144 people and transformed North Park into a swath of wreckage and carnage will be remembered Sept. 25 with an online commemoration by Grossmont College’s history department.

Organized by history instructor Marty Ennis, the 1 p.m. free Zoom event will include a lecture, video clips and discussion about the still ongoing campaign for an official memorial honoring crash victims.

“There are still many surviving family members and friends of the victims who experience the loss caused by this tragedy,” said Ennis, who has been putting on annual presentations at Grossmont College for the last several years, but is limiting it to a virtual event this year because of the pandemic.

“First responders experienced a scene unlike anything they had ever encountered and worked under extreme conditions to provide emergency aid, put out fires, and move people to safety,” he said, noting that what was at the time the deadliest air crash in the country represents an important chapter in local history.

Pacific Southwest Airlines was based in San Diego and many aboard the doomed flight were PSA workers.

“There are still many surviving family members and friends of the victims who experience the loss caused by this tragedy,” Ennis said. “Many students and faculty at St. Augustine High School saw the crash and the gymnasium of the school became a makeshift morgue.”

Even more than four decades later the tragedy still stirs heart-wrenching memories and deep emotion on the part of a group dedicated to the creation of a memorial to crash victims.

The Sept. 25, 1978 mid-air crash of a Boeing 727 and a Cessna killed all 135 people aboard the commercial jetliner, along with two in the private plane and seven people in houses. Nearly two dozen homes were damaged or destroyed and nine other victims on the ground were injured. The crash prompted changes improving airline safety.