For Caesar Mazahreh, June 9, 2021 was a milestone: celebrating his 60th birthday on the same day as Grossmont College’s 60th commencement. 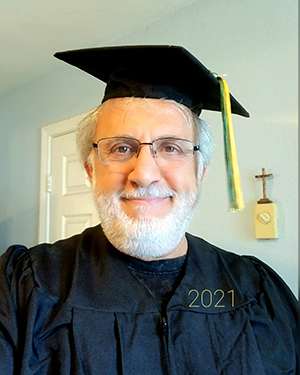 For Caesar Mazahreh, June 9, 2021 was a milestone: celebrating his 60th birthday and ceremonial tassel turn on the same day as Grossmont College’s 60th commencement.

“I informed my daughter of the coincidence and she said, ‘Dad, you are as old as Grossmont College,’” said Mazahreh, who earned associate degrees in Business Administration, Economics and a certificate of achievement in University Studies with a 3.6 grade point average.

Mazahreh first came to Grossmont College 41 years ago right after graduating from high school in Jordan. He lived with his brother, who was attending San Diego State University. After earning his bachelor’s degree in electrical engineering, Mazahreh’s brother returned to his home country.

Alone and struggling academically his first time at Grossmont College, the young Mazahreh lost his financial aid and ended up dropping out, working odd jobs to get by.

“It took me 41 years to get my AA degrees and in that time, I got married, became a U.S. citizen, had a boy and a girl, got divorced, raised my two children on my own and saw them through college,” Mazahreh said.

He vows in the next two years to earn a bachelor’s degree in economics and accounting from UC Santa Barbara, the one university of several granting him admission that has a program designed to help students pass the CPA exam in preparation for certification.

Despite having the proficiency with numbers to carry on for 35 years as a controller and accounting manager for several prominent San Diego businesses, including the historic Spreckels Building, Mazahreh said that without the academic credentials, he could only advance so far in his career.

“The reason I came back to finish what I started 41 years ago is that without a degree, no matter how smart or good you are at what you do, it will come back and bite you in the gluteus maximus,” he said.

When the recession hit in 2008, the accounting firm where Mazahreh worked as controller lost about half of its clients and he found himself replaced by a low-paid bookkeeper. With a son attending UC Santa Cruz and a daughter at UC San Diego, he took on in-home bookkeeping to scrape by and pay expenses.

“By the time I finished paying for their college; I had nothing left. I lost everything, my home, furniture, and all personal possessions,” he said. “I was surviving on a week-to-week basis. This was the hardest time in my life. It was harder on my kids to see their father, the nice suit and the CFO, shrunk to nothingness.

“At the end of 2019 I was faced with a choice. Hang it up or do something about it. I thought about what really was blocking progress in my life and career. The answer was getting an accounting degree and getting certified.”

The epiphany proved for naught, when he was initially denied financial aid.

“I could not resurrect my life and career,” he said. “I was doomed. I cried in private that day. I never told anyone this. The one hope I had left to make a change to my status had faltered.”

Desperate, he turned to then-financial aid supervisor Barbara Gallego for help, imploring her with his life story, which prompted the now interim dean of Admissions and Records and Financial Aid to press an appeals document in his hands.

“I probably had watery eyes, she held my hand, pointed to a plaque on the wall that said, ‘There is Always Hope,’” Mazahreh said. “Afterwards, I went to a public library, spent hours typing up a five-page appeal.”

Days later, when a text message on his cell phone read, “I have great news for you,” he said his heart began pounding and he gulped for air as if completing a marathon.

After his successful petition for financial aid, with expert academic counseling, his educational path was charted, and within four consecutive semesters – spring, summer and fall of 2020 and spring 2021-- he had earned the 50 units needed for graduation with straight A’s.

“When I first joined Grossmont, I found out that my GPA from the early ‘80s was 1.65 and on I was on probation,” he said.

Asked what advice he would give non-traditional students like himself, Mazahreh responded that the only obstacles are those created in one’s own mind.

“I told someone I am going back to school,” Mazahreh recalled. “He said well, how old are you?’ I told him 58. He shook his head and said, ‘That’ll take you four years. You’ll be 62.’ I replied, ’Well there’s nothing wrong with your math.’ He kept shaking his head. I said, ‘hey, let me ask you a question: ‘If I don’t go to school, how old will I be in four years?’ He said: ’62.’ I countered, ‘but without a degree. My friend, not going to school will not stop the years from passing, will it?’ He smiled and said: Nope. It sure won’t.”