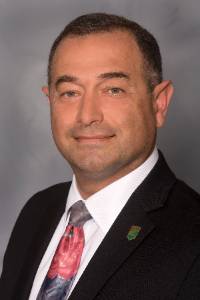 Grossmont College President Nabil Abu-Ghazaleh, who since 2015 has led the academic and physical transformation of the El Cajon community college, announced his retirement today.

“I am leaving my post after 31 years of service in the California Community Colleges to spend more quality time with my wife,” Abu-Ghazaleh said in an announcement to campus. “As we have spent more time together working from home in the past six months, we have revisited forgotten plans. Long before I left the classroom in 1999 to become an administrator, we envisioned living simply and retiring early to travel and pursue a more active lifestyle.”

Thanks to his long-standing commitment to equity for students, Abu-Ghazaleh leaves the college much changed from his start there five-and-a-half years ago. During his time as president, Grossmont College has been recognized twice as eligible to compete for the $1 million Aspen Prize for Community College Excellence, the nation’s signature recognition of high achievement and performance among America's community colleges, that placed it among the top 150, or top 15 percent, of community colleges nationwide.

The college has also been twice recognized by the Campaign for College Opportunity for its work in increasing the number of students receiving Associate Degrees for Transfer, or ADTs, which guarantee transfer to California State University. Last year, Diverse magazine recognized the college as No. 52 in the country for the number of associate degrees awarded to minorities, with 1,395 degrees awarded during the 2017 – 2018 academic year. Lastly, while the college has often been a top transfer institution to highly competitive San Diego State University, the college was the No. 1 transfer institution for fall 2019, the most recent year for which data is available.

“Dr. Abu-Ghazaleh has been a brilliant leader and a staunch advocate to ensure that every Grossmont College student received an excellent education,” said Lynn Neault, chancellor of the Grossmont-Cuyamaca Community College District. “His insight and compassion will be missed.”

Grossmont College has also embarked on a physical transformation as the result of the approval of Proposition V by East County voters in 2012. During Abu-Ghazaleh’s presidency, the college has improved its infrastructure with the installation of a new chiller plant, completed the construction of the new Performing and Visual Arts Center, renovated Bldg. 31 with new classrooms and offices for several Career/Technical Education and Workforce Development programs and started  work on Bldg. 36, which will include academic program offices and a new Veterans Resource Center.

Also under his tenure, Abu-Ghazaleh expanded the college’s community outreach efforts to include newcomers and refugees from the Middle East and North Africa, which are a growing part of the East County community. Partnering with several nonprofit organizations, Grossmont College has worked to promote higher education and adult learning opportunities to the newcomer community through events coordinated by the college’s Adult Reentry and Outreach programs. Fluent in Arabic, Abu-Ghazaleh has also appeared several times on Chaldean Radio, an internet radio station for Iraqi refugees based out of El Cajon; spoken at several community and church events; and welcomed families to commencement in Arabic, in addition to Spanish and English.

Prior to Grossmont College, Abu-Ghazaleh was president of West Los Angeles College in the Los Angeles Community College District from 2011 to 2015. Previously, he had also worked as vice chancellor of educational services and technology at Coast Community College District in Costa Mesa, vice president of academic affairs at Pierce College in Woodland Hills, dean of student learning at Moorpark College near Simi Valley and interim dean of engineering and technology at Pasadena City College.

Abu-Ghazaleh will continue to work through the fall semester, with his last day on Jan. 4, 2021. Neault will announce plans for an interim president and the presidential search process in the coming weeks.